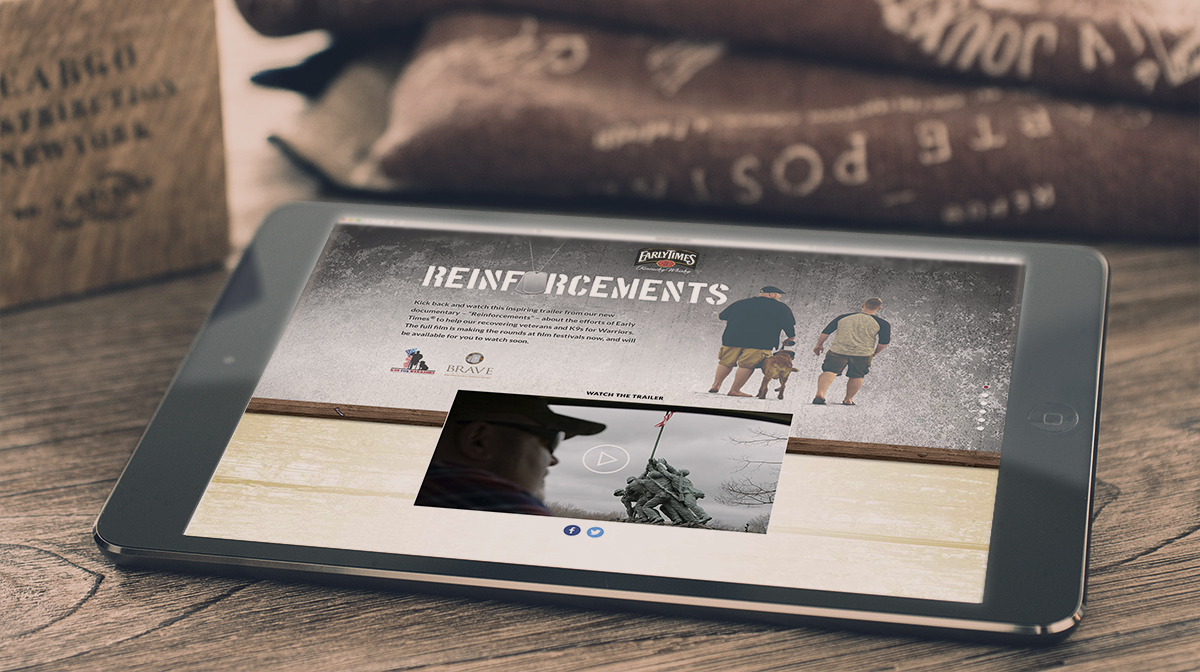 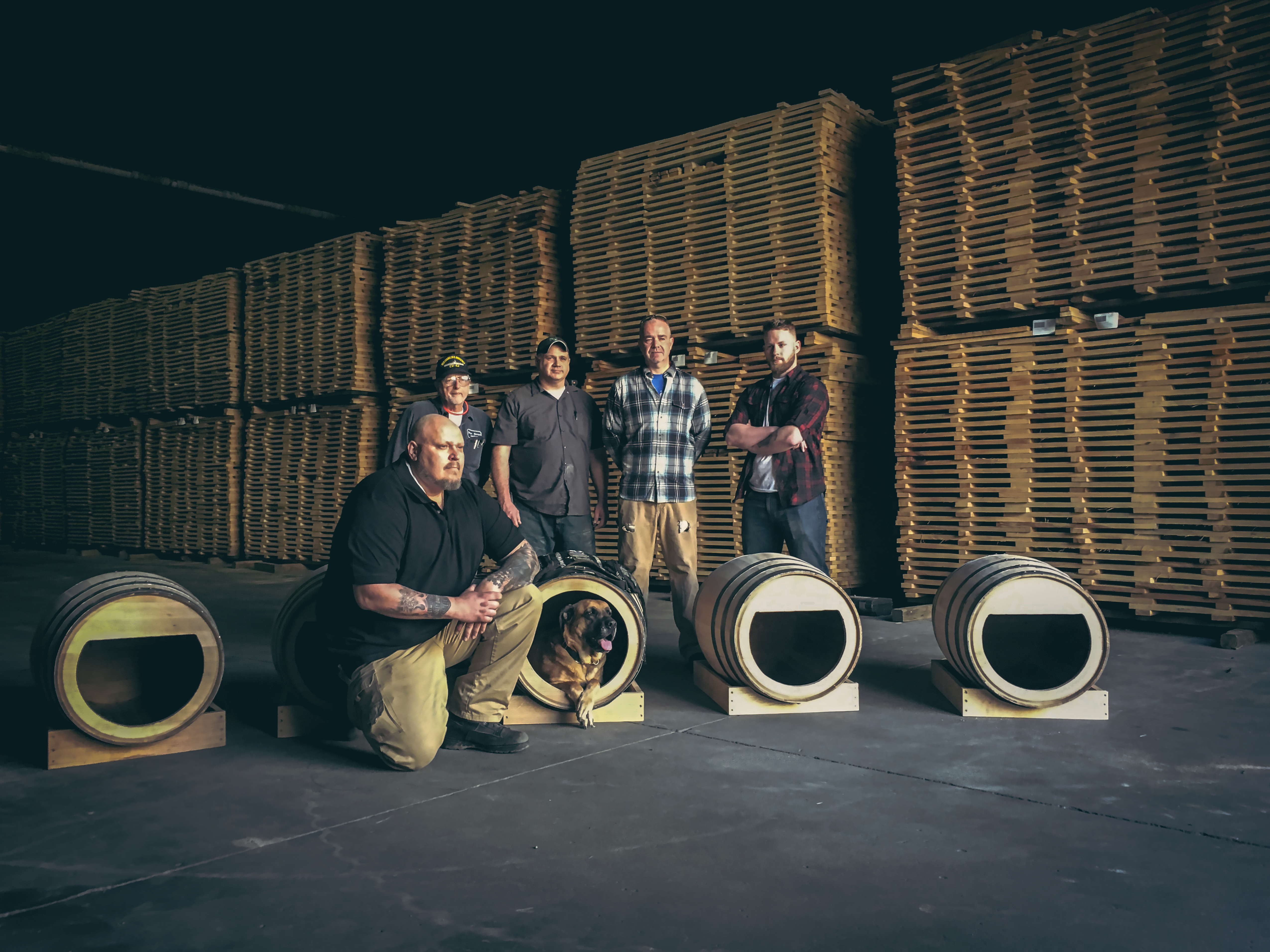 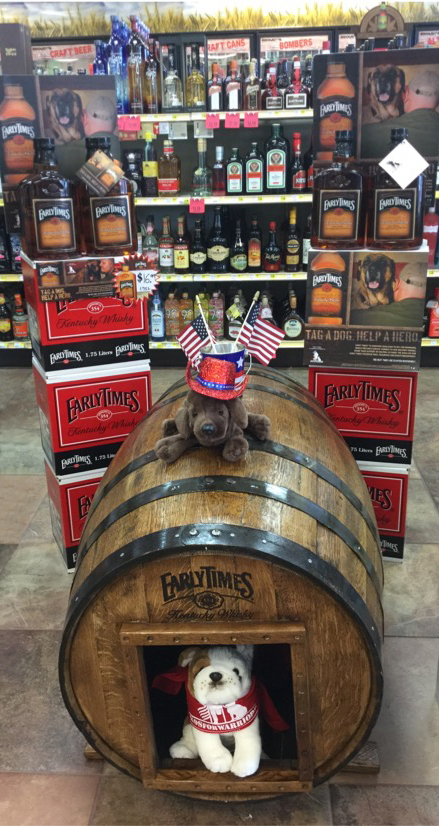 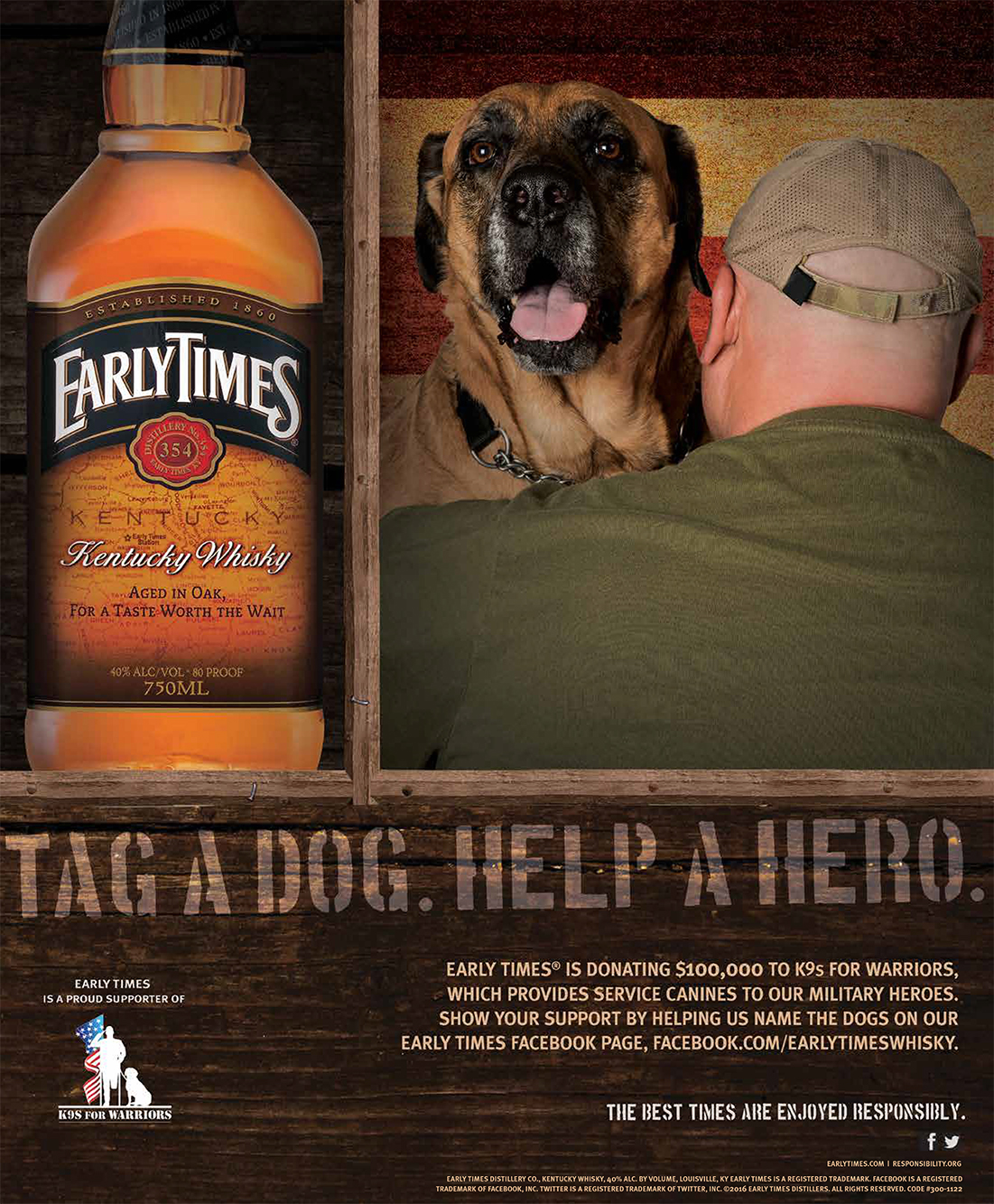 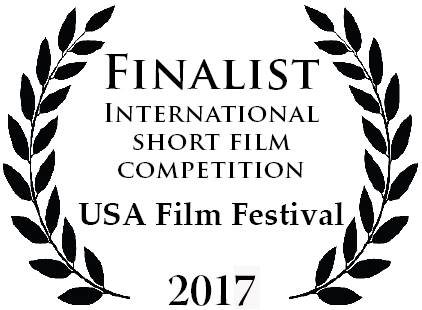 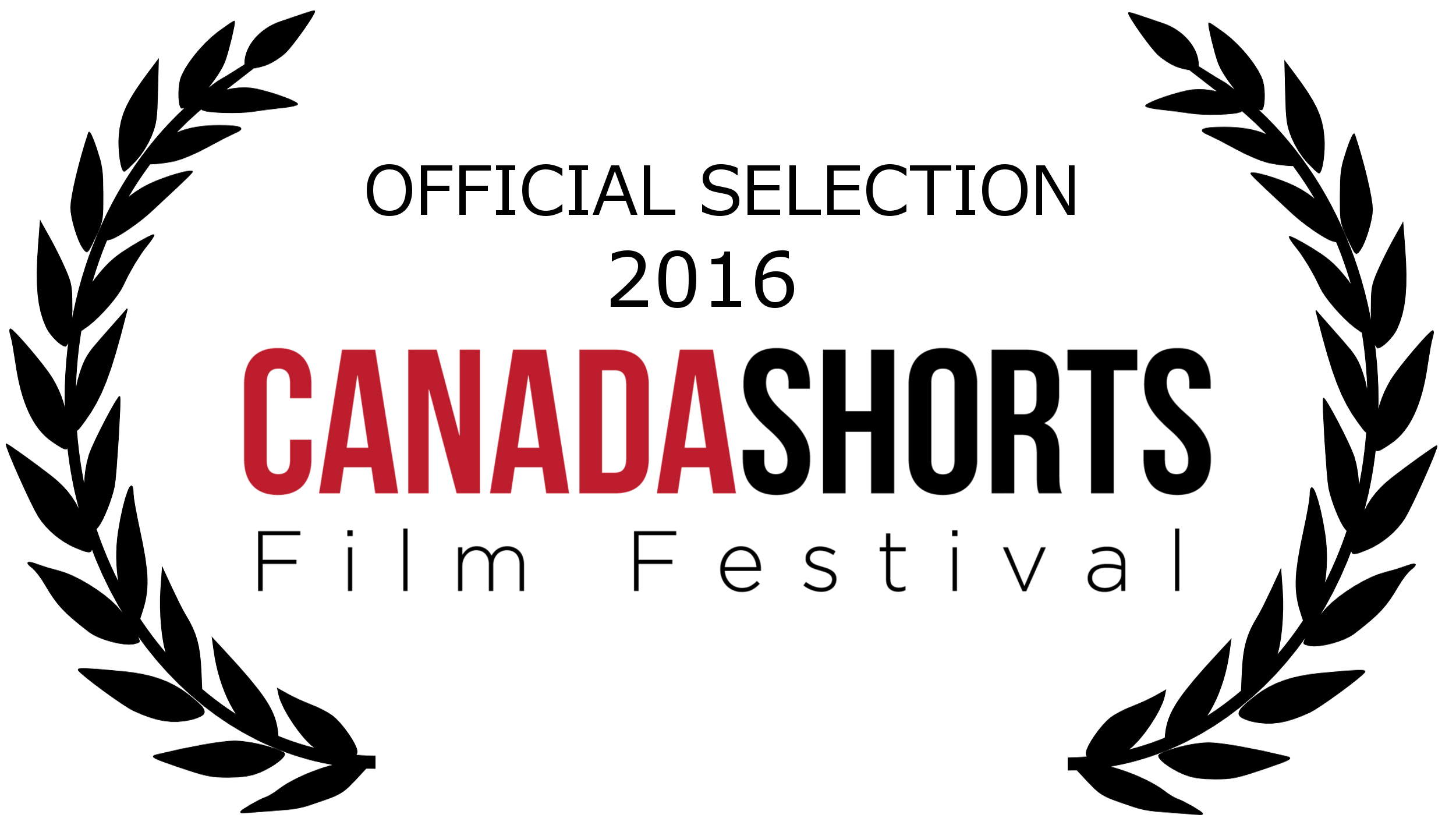 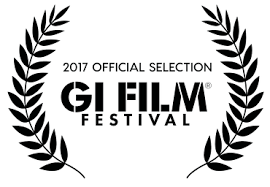 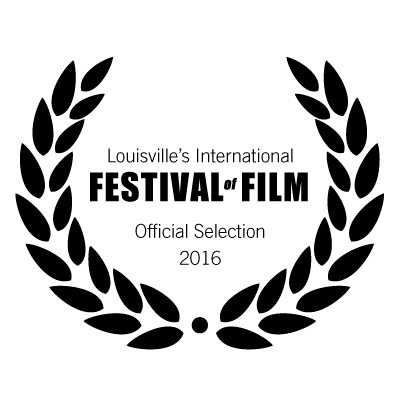 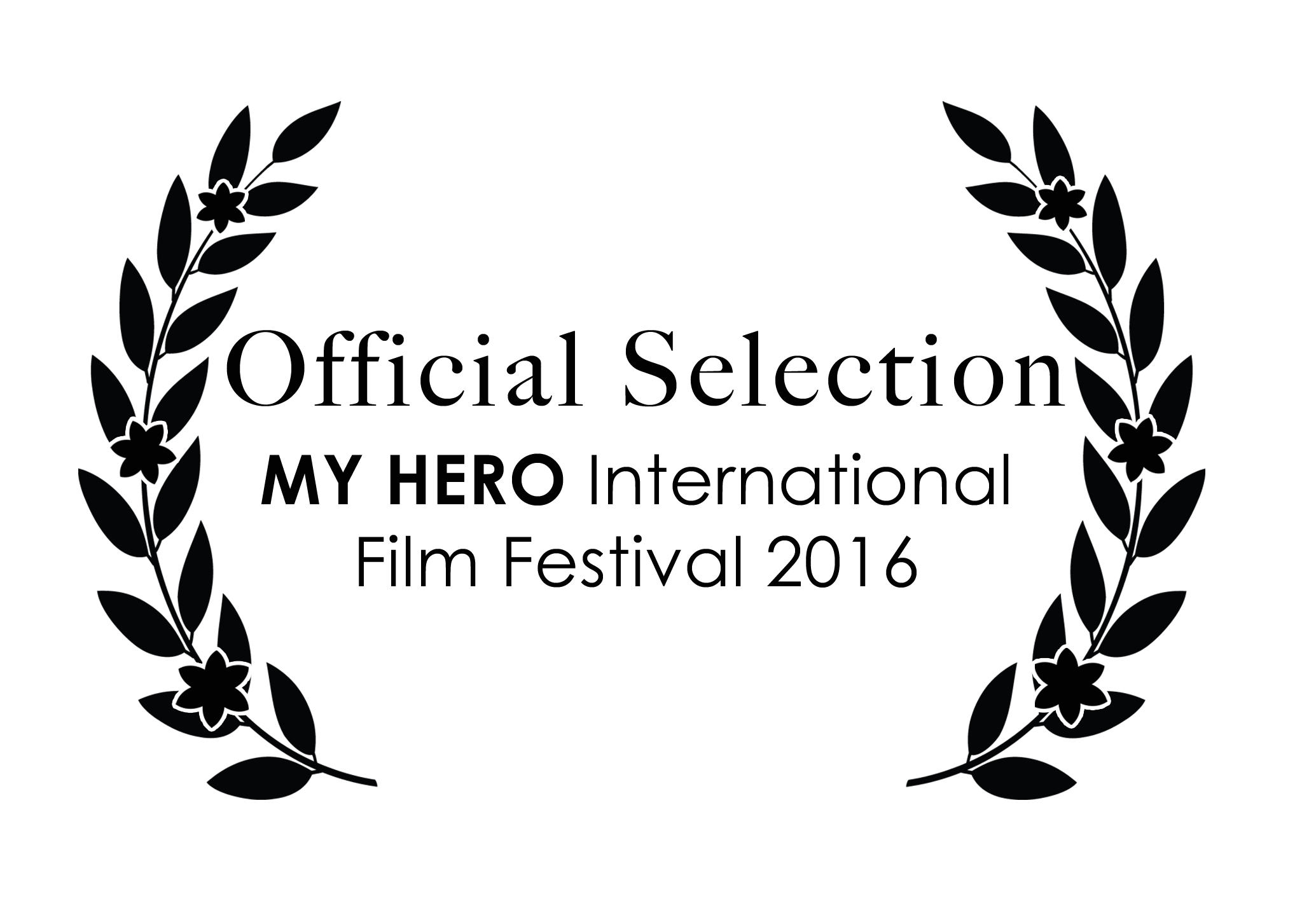 While at PriceWeber, Van Zandt was enlisted to concept a promotion for Early Times Whisky. Our client had found a correlation with their consumers buying dog food and whisky. Random, but true. Van Zandt and his team came up with the idea of commissioning Brown-Forman’s coopers to build Early Times branded Whisky Barrel Dog Houses, and since Early Times had always been a patriotic American brand, we thought we could deliver these unique Dog Houses to U.S. military veterans with service dogs.

All this led Van Zandt to think – this would make a great movie – thus Van Zandt co-wrote and produced the award-winning Documentary Film “Reinforcements” with Nadus Films for Early Times Kentucky Whisky & K9s for Warriors. This documentary follows the transformational journey of Travis Davis – a retired Army Corporal struggling with PTSD – as he adjusts to civilian life with the help of Joe Swoboda, a retired Army Sergeant First Class, and his service dog companion, Lilly. “Reinforcements” is an official selection at several film festivals, and it has already won hardware and praise including “Best Documentary Short” at both The Louisville International Film Festival and The Nevada International Film Festival, as well as “Best Documentary” at The Miami Veterans Film Festival.

* “Reinforcements” is now available to watch on Early Times’ website and for every view, Early Times is donating 22 cents to help train service dogs for our veteran heroes!

* The “Reinforcements” trailer alone has been a hit, as it has been viewed 1.8 million times and it has been picked up by nontraditional media outlets such as We Are the Mighty,® viewed 49,000 times and shared an additional 780 times.

* We distributed our Early Times branded Whiskey Barrel Dog Houses to ABC stores across the USA as unique Point of Sale material.

* We invited consumers to share pictures of their own dogs on Early Times’ social pages, for the chance to win their own Early Times branded Whisky Barrel Dog House, which so far has elicited over 10,000 likes, 5200 comments with dog photos, and 2600 shares.

* We asked consumers to help K9s for Warriors name our sponsored service dogs and this brought 1000s of names to the table along with social interaction out the wazoo.

* We leveraged veterans’ social clubs such as Veterans of Foreign Wars (VFWs) and American Legions as venues to host private screenings for some of Early Times most loyal consumers and accounts, and we left behind our Early Times branded Whisky Barrel Dog Houses as well as “Reinforcements” film posters that will remain there for years to come.

* Our “Reinforcements” Campaign ended up winning Best Of Show for Overall Cross-Category Campaign at The Beverage Dynamic Awards and it also won first place for Best Social Media Campaign and Best Special Video.